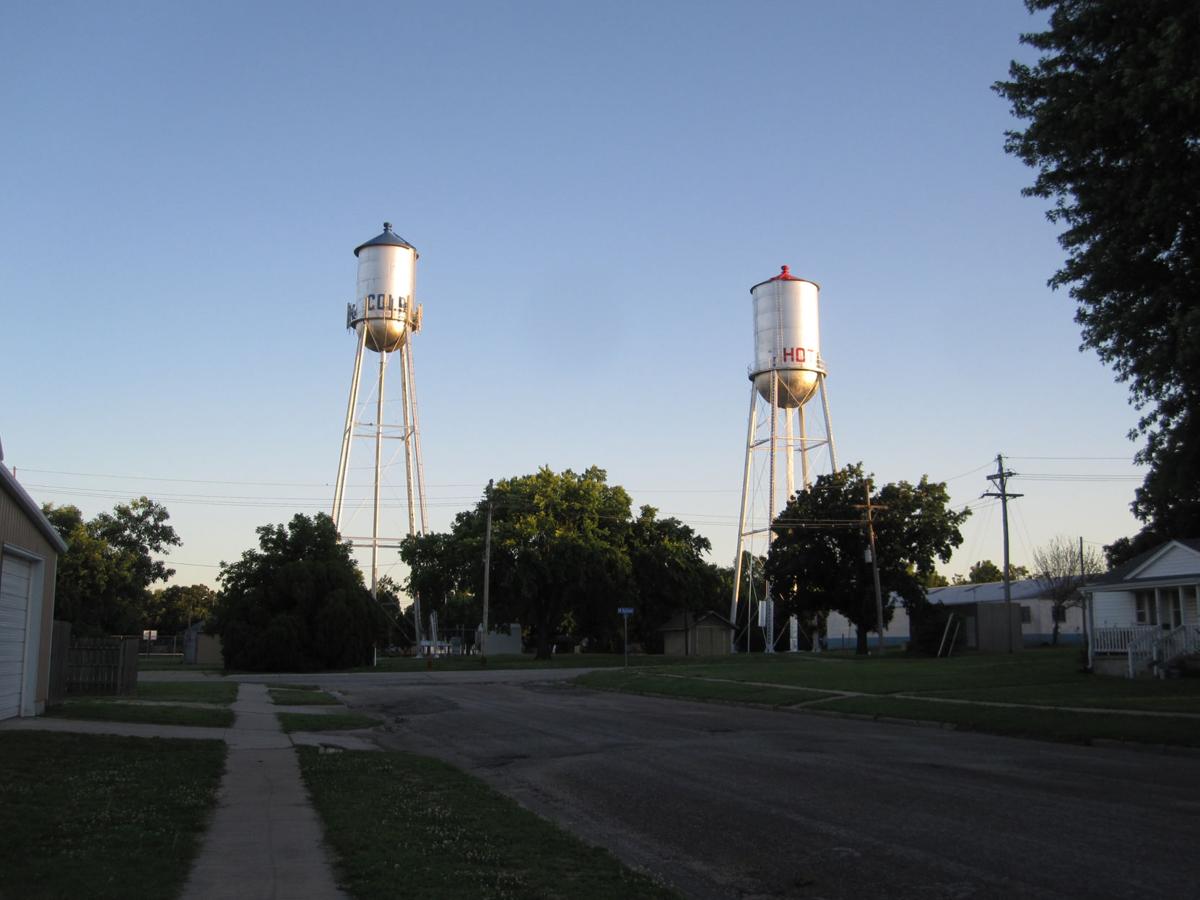 The twin water towers of Canton, Kansas, were recently repainted, according to Linda Klatt, city clerk. While one is labeled hot and the other cold, the water within both is actually the same temperature. (Journal photo by Jennifer Theurer.) Canton, Kansas, is the mailing address of the dry land wheat farm and commercial cow/calf operation where I was raised. My pre-teen self thought Canton was a terribly inconvenient seven miles south of my parents’ home.

Once I had a legal driver’s license, though, there wasn’t much that kept me away. One summer evening involved a city-wide water balloon fight and should I ever instigate one again I’ll make sure the high school’s star baseball pitcher is on my team this time.

The town of my youth featured a predominantly agricultural landscape with a steady oil industry and a stream of folks who left town every morning to work in the factories of nearby McPherson, Kansas.

Today the oil industry is still steady, the stream headed to McPherson has become a flowing river, and agriculture is being handled by a select few.

Canton is home to Maxwell Game Preserve, located just two miles from my parents’ home. I remember well the roaming buffalo and herds of elk as I traveled to the lake within the preserve.

On a clear day, the observation tower gave me the opportunity to see my grandparents’ and parents’ houses just over a mile away.

Back then fishing and camping was the main attraction for visitors to Maxwell. Now, there are many educational and special interest events going on in addition to guided tours of wildflowers and herds that reside in the preserve.

In an effort to promote Maxwell within the community, seven concrete buffalo statues were placed at the intersections along Main Street.

According to Cheryl Everhart, co-owner of Canton’s own Three Sisters Tea & Treasures, the late Tim Everhart, longtime postmaster, was instrumental in making the buffalo project a reality. Tim garnered sponsorship of the statues from local businesses, then organized the purchase and installation with the help of her husband Dwight’s winch truck and support of the Friends of Canton group.

Canton’s population swells when the Legion Hall hosts bingo, but according to the U.S. Census Bureau, it has maintained a 790-resident average since 1990.

The McPherson County Fair has been held in Canton since 1948 and features events for all ages. You can still bid on the first, second and third place winning cakes of the Open Class Chocolate Cake Contest at Friday night’s rodeo. In 1995, I was one of the lucky winners and still used my prize, a hand mixer, up until a couple years ago.

The grocery store has changed owners a few times over the years, but soldiers on along with the two banks, Rundstrom Lauer, Inc. accounting firm and Olson’s Mortuary.

There is a new hardware store and the locker plant has been up for sale a few times.  Canton hasn’t had a full-time doctor available for some time, but residents have options in surrounding towns as well as a top-notch volunteer ambulance service. The volunteer fire department does its best to protect the residents in its area that extends well past the half square mile footprint of town.

My mom may have been seven miles past the edge of the earth, as my schoolmates used to describe my family’s farm, but she still managed to know what I had been up to in town sometimes before I even got home. Most likely there were times she knew what I had done before I did it. She would call me by my full name, shake her head, and say, “I’ve got little birdies watching you all the time.”

Some of the faces in Canton have changed in the 23 years since I called it home, but the steadfast resolve is still there and is something I carry with me today.

Claim to fame: Home of the last built Carnegie Library