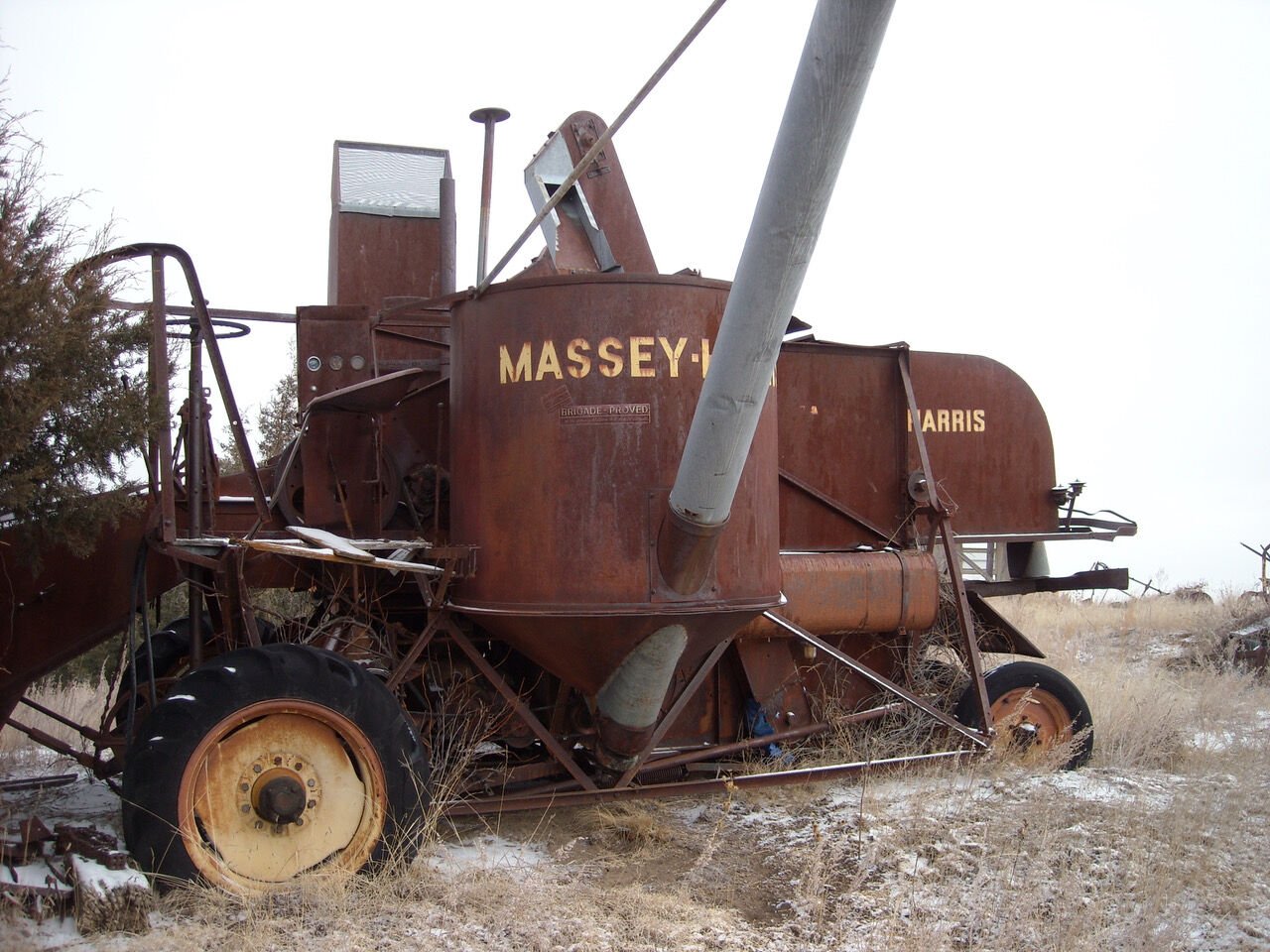 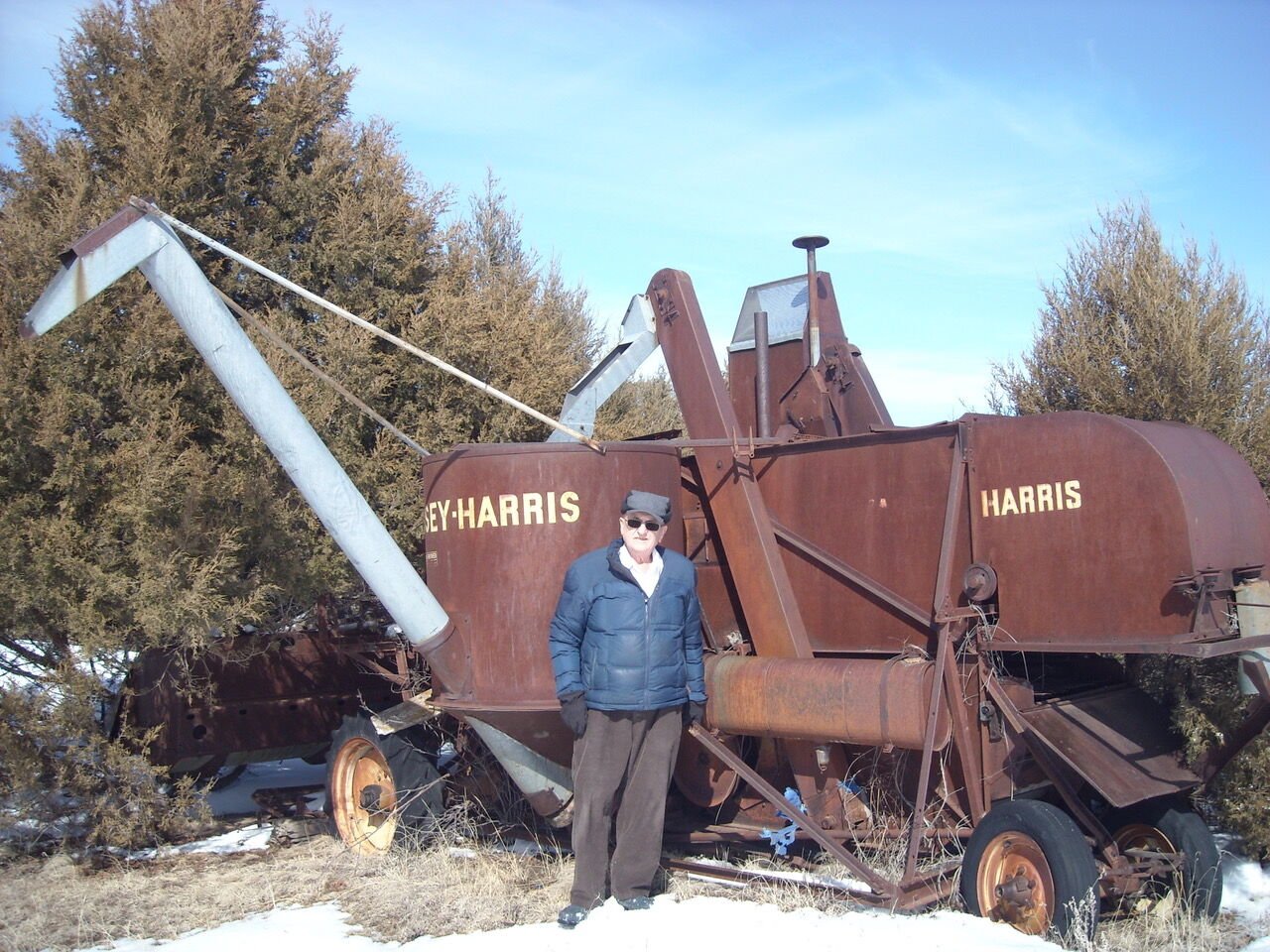 Back in the days of World War II, even though the war was being fought overseas, Americans were hit hard by rationing. Steel, rubber, gasoline, sugar and many other foodstuffs needed to support the troops could only be purchased by the public when accompanied by ration stamps.

The economy was vastly improved over the Great Depression, but more than money was needed to buy products. Factories were retooled to make airplanes, tanks, and other war needs. Against that backdrop, the War Food Administration asked Americans to sow 13.8 million more acres of wheat than the previous year, and somehow it had to be harvested. As is common in America, ingenuity came to the forefront. In this case Joe Tucker was the man with the plan.

Tucker was a vice president and sales manager for the Massey-Harris Company in the United States. He came up with a proposal to solve the harvest needs while keeping in mind the limited amounts of available steel. In 1944 Massey-Harris was given a quota to manufacture no more than 43,604 pull-type combines and 1,100 self-propelled Model 21 combines. Tucker proposed the theory of the Harvest Brigade to the U.S. War Production Board.

His plan was to allow Massey-Harris to obtain enough steel and other scarce raw materials to make an additional 500 Model 21s. In turn, the company would sell them with one stipulation: each purchaser would have to sign a contract and agree to harvest at least 2,000 acres of wheat with his combine. The War Production Board approved the program and the models were delivered. Each combine cost about $2,500. A combiner typically charged harvest customers $0.25 per bushel; harvesters who charged by the acre were paid $2 to $3 per acre harvested. The harvesters made their payments, the growers were satisfied, and the bountiful crops were harvested. Each of the 500 red combines bore a sign declaring, “Massey-Harris Self-Propelled Harvest Brigade, Brigade-Proved … in the famous Million Acre Harvest Brigade.”

The self-propelled combine had come onto the market in the late 1930s. Its precursor, the pull-type combine, required a tractor for locomotion; tractors had to be heavy enough to pull plows and that required considerably more gas than a self-propelled combine. Although the combine was only used for harvest, it was fitted for various crops from wheat to beets and carrot seeds, beans and peas depending on the area of the country.

At the conclusion of the Harvest Brigade, it was estimated that 500,000 gallons of gas was saved compared to what would have been used with tractors and pull-types. Because the combines could be driven faster and were more efficient resulting in a cleaner, more complete harvest, it was calculated that 365,000 man-hours were economized and a better yield was produced.

Among the members of the Harvest Brigade was Alfred Seder, a farmer near Oral, South Dakota. Given extra gas ration coupons to use during harvest, he was able to combine the required 2,000 acres in the area of Fall River County where he lived. In 1944 the area was dryland farm and wheat country, giving him ample acres. For others, the Harvest Brigade was when the industry of national custom harvesting really had its beginning. Prior to combines, threshing machines were moved from farm to farm in community areas but they did not travel far.

A few years later, from 1950 to 1952, Russell Wyatt and his brother, Harold, leased combines and went on the custom harvest, starting each year in Greensburg, Kansas, and working their way north. It was the lure of combines that prompted Russell to buy Seder’s combine as a way of preserving the history. The Harvest Brigade is a little known, but highly important, element of the stateside activities of World War II.

Peggy Sanders writes from the ranch on WG Flat east of Oral, South Dakota, and can be reached at thankafarmer4food@yahoo.com.