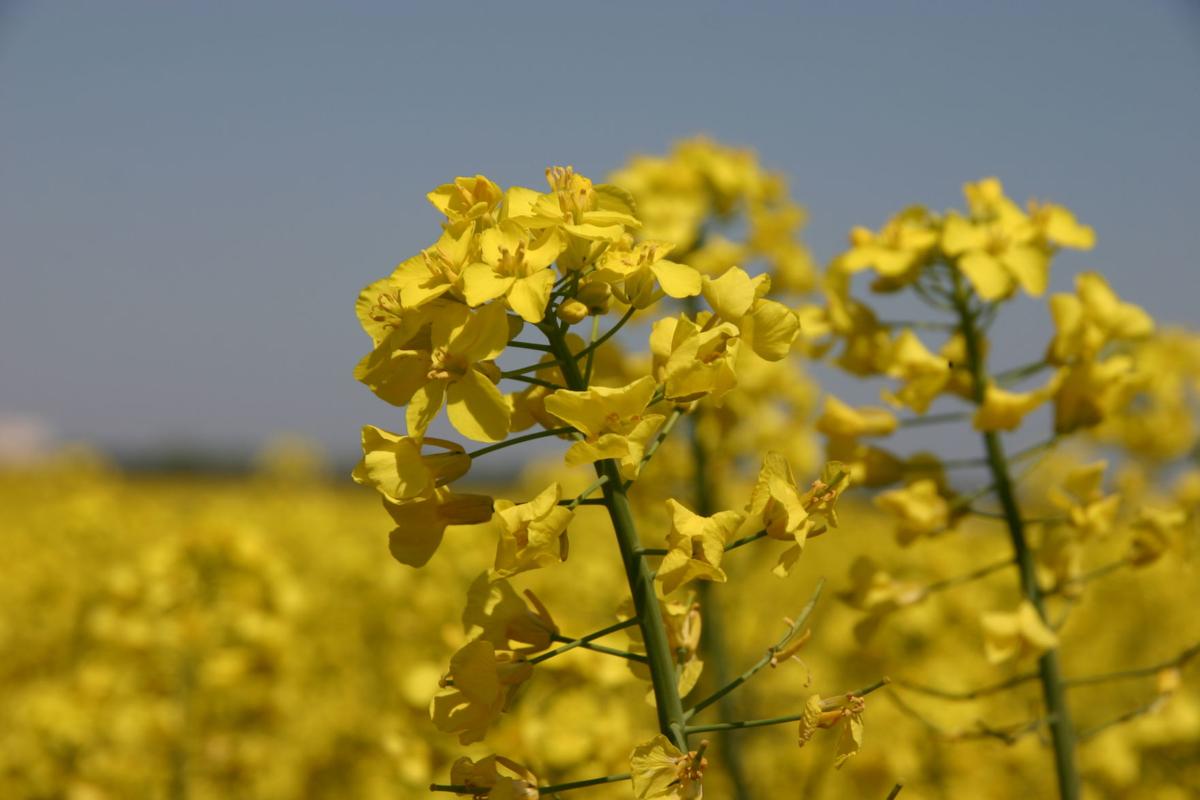 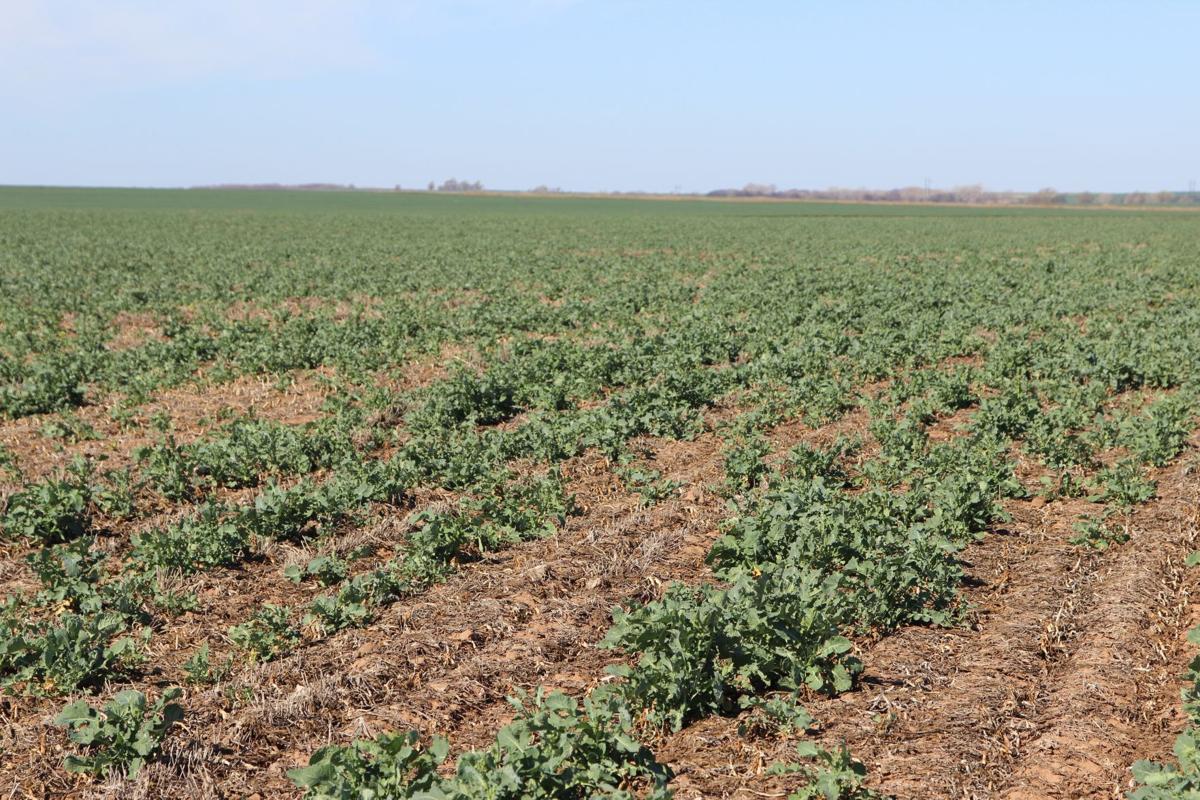 Winter canola grows in a field of wheat stubble in Oklahoma. Oklahoma State University scientists continue to study the allelopathic effects of certain varieties of winter wheat on the following rotation of winter canola. So far they’ve identified a number of varieties that when their stubble is left in a field to deteriorate give off biochemicals that seem to affect canola stand emergence. (Journal photo by Jennifer M. Latzke.)

Winter canola grows in a field of wheat stubble in Oklahoma. Oklahoma State University scientists continue to study the allelopathic effects of certain varieties of winter wheat on the following rotation of winter canola. So far they’ve identified a number of varieties that when their stubble is left in a field to deteriorate give off biochemicals that seem to affect canola stand emergence. (Journal photo by Jennifer M. Latzke.)

Allelopathy—it’s not exactly a word that trips off the tongue lightly.

But it’s a word winter canola researchers in Oklahoma and Kansas are starting to use in conversations with farmers as they consider selecting the wheat and canola varieties they’ll plant on their farms.

Allelopathy occurs when one crop produces certain biochemicals as its residue breaks down and degrades in the field. These biochemicals may then influence germination, growth and yield of the following crop. Josh Lofton, cropping systems specialist for Oklahoma State University, worked with a team of researchers and found that residue from certain varieties of winter wheat show an allelopathic effect on the following crop of winter canola’s stand establishment and yield.

Lofton explained that for years farmers thought their poor canola stands in no-till wheat fields had something to do with the equipment they were using to plant the crop. So OSU researchers started evaluating fields about five to six years ago across the state looking at the planting equipment farmers used. They noted that, while there was still variability in stand establishment, some fields had good emergence while others did not even though they were planted with similar equipment. The only difference was the variety of the prior wheat crop whose residue was left in those fields.

So, they created a greenhouse lab experiment. Researchers collected residue from OSU’s own wheat variety plots, and made a “tea” out of steeping the residue in water. The tea was collected, labeled according to wheat variety and then used to water canola seeds that were in petri dishes in the lab.

More than 200 wheat varieties’ residues were studied in the lab. Researchers found they could isolate approximately nine wheat varieties that show potential to affect winter canola root growth. Lofton’s team learned the compounds DIMBOA and DIBOA found in the wheat residue are the cause of the allelopathy. As residue breaks down over the summer months in a no-till field, it releases these chemicals, which can cause reductions in gene expression. That causes reduced germination of seedlings, and thus inhibits plant growth in canola planted into the residue.

“The greenhouse and lab were a way for us to take our 200-plus wheat varieties, their residue, and see if our theory was right,” Lofton explained. Now, the researchers are at a field level of the study. They are working with David Marburger, OSU’s small grain specialist, and using his variety plots to cross plant canola into the wheat residue left from the trials to further study the phenomenon in currently released varieties, plus experimental varieties in the breeding line that may be closer to release in a year or two. By gathering this data on each wheat variety tested, they hope to give growers another bit of information they can use in planting decisions.

Still, there are a lot of components beyond just the prior year’s wheat variety that go into the allelopathic effect. For starters, the research team wants to learn if there are some canola cultivars that are more susceptible than others to allelopathy. They’re working with Mike Stamm, from Kansas State University, to see if the effect is greater on open pollinated or hybrid cultivars, and Roundup Ready or non-Roundup cultivars.

“So far we don’t necessarily see the glyphosate resistant trait playing a major role,” Lofton explained. “But between the open pollinated varieties or hybrids, the hybrids seem to be more impacted. That’s not surprising to people who grow canola, who know that hybrids are more sensitive to abiotic stresses at early growth stages. With limited moisture or rapid cooling, they can’t handle the added layer of winter stress. This would be just an additional layer to winter stress.”

Weather can be a large factor in whether or not allelopathy has a greater or lesser affect on the canola, Lofton warned.

“Last year, we had a warmer winter situation, and so we didn’t see a whole lot of winterkill influence on yield,” he explained. However, if the canola doesn’t have enough time to harden off before winter, if there is a dry winter with a rapid chill down, that could weaken the canola enough where the allelopathic effect of the wheat residue might hurt it even more and that could be a situation that could lead to upwards of 90 percent stand loss—in the worst case.

“We had a warm fall this year, a big portion of Oklahoma was dry on up into the first freeze,” Lofton said. “We went from 80 degrees to sub-zero temperatures the next and that hurt us.” So, Lofton cautions farmers to look at allelopathy of wheat on canola as just one more factor they need to consider in giving their canola the best environment they can to thrive.

“This will not be the sole factor for a winter failure but it can add to the potential,” Lofton said. “We have wheat varieties that don’t have good disease packages protecting them from stripe or leaf rust,” Lofton said. “But, we don’t say ‘don’t plant those varieties’. Instead we recommend you don’t plant those in areas that are prone to rust.” The same is true for this allelopathy factor that OSU is continuing to study.

“The intent is for growers to use this information we are gathering as a tool to help you in determining your rotation and make smarter choices,” he said. “In talking with Drs. Marburger and Carver, we’re just now getting to test some of the newer varieties that are coming out in the field. Gathering that information so we can tell growers that this wheat may not be strong in a rotation with canola, so if the grower is really interested he can select between two varieties—one that’s a strong rotator with canola and the other that may not be.”

Allelopathy is an uncommon word in anyone’s vocabulary, to be sure. But with information and selection tools, it shouldn’t be a scary word.

How can farmers mitigate allelopathy in fields?