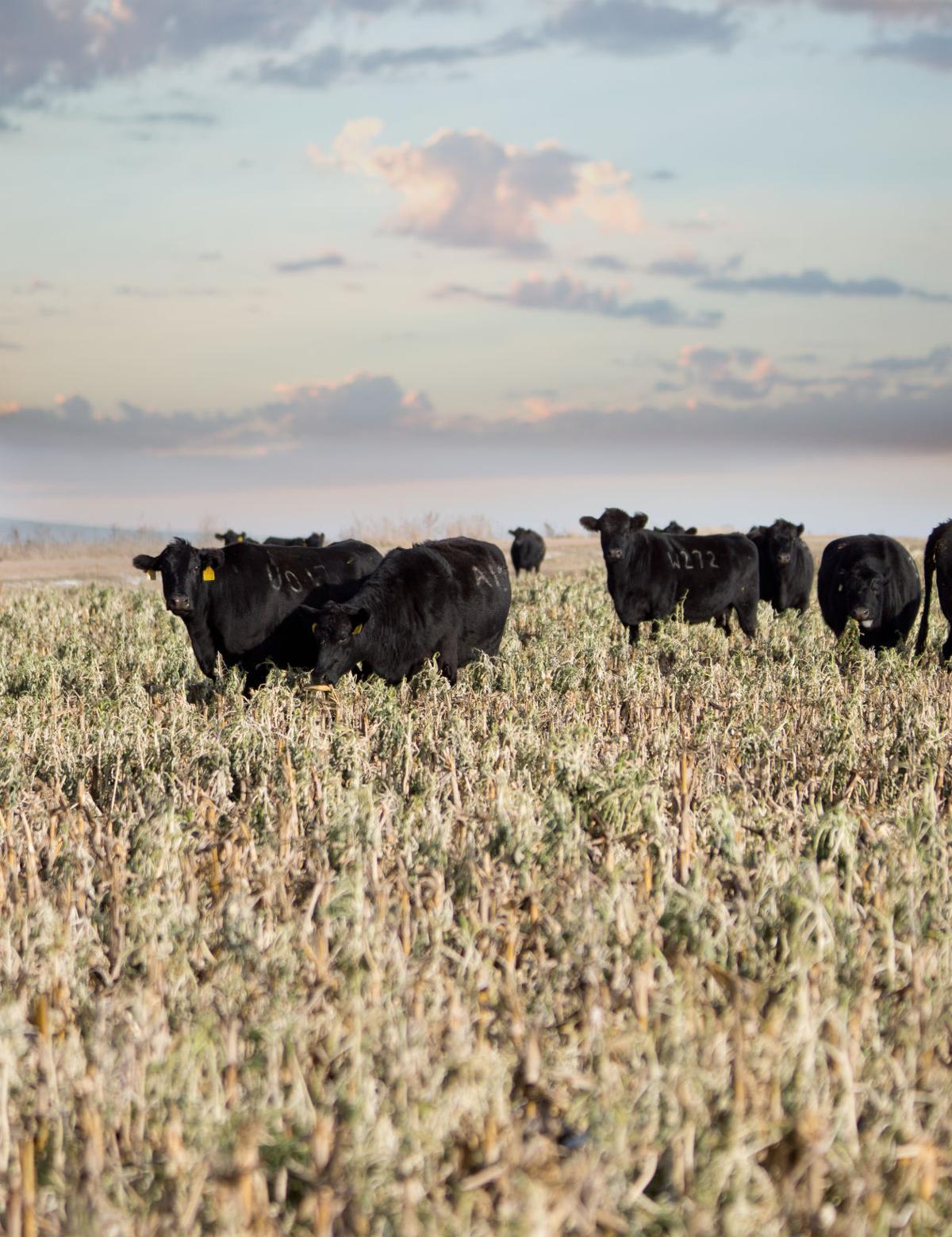 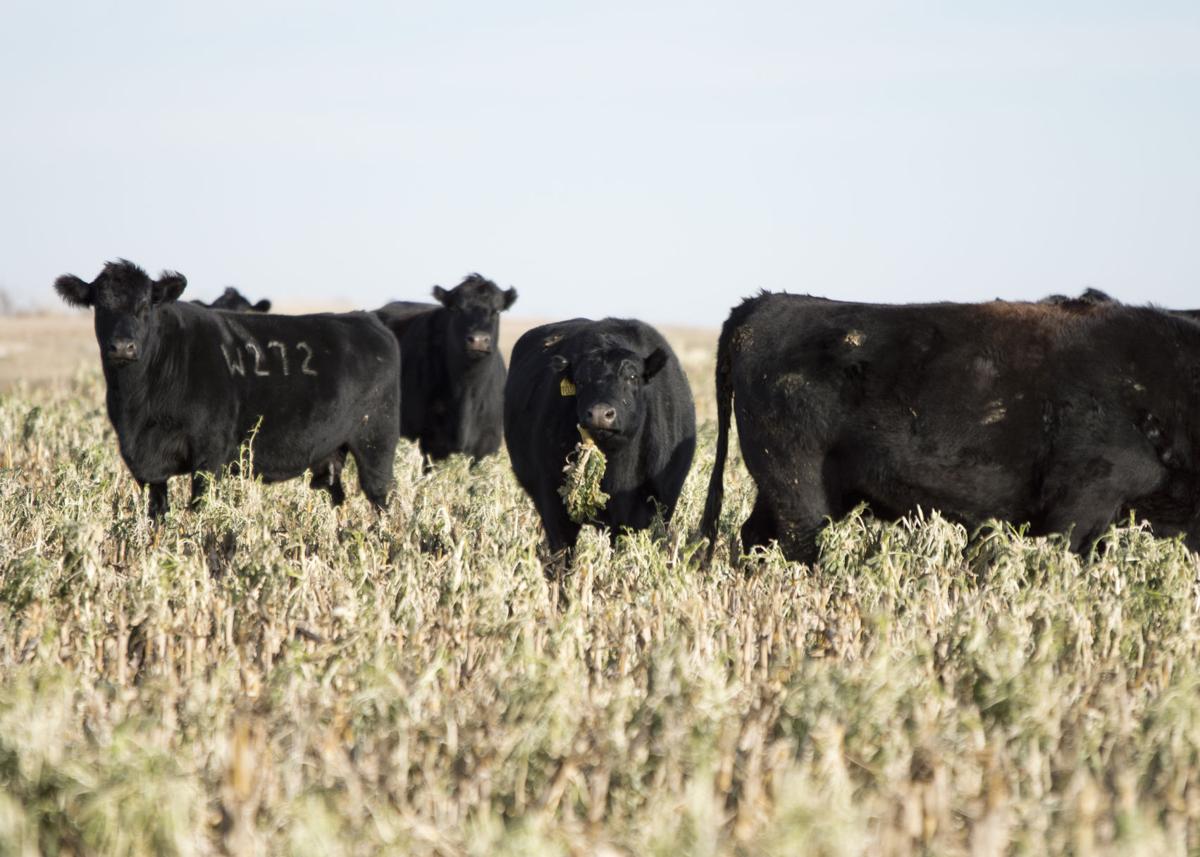 Cows can graze the turnip mixture from October through March and will have good nutrition throughout the winter. (Journal photo by Derek Vogt.) 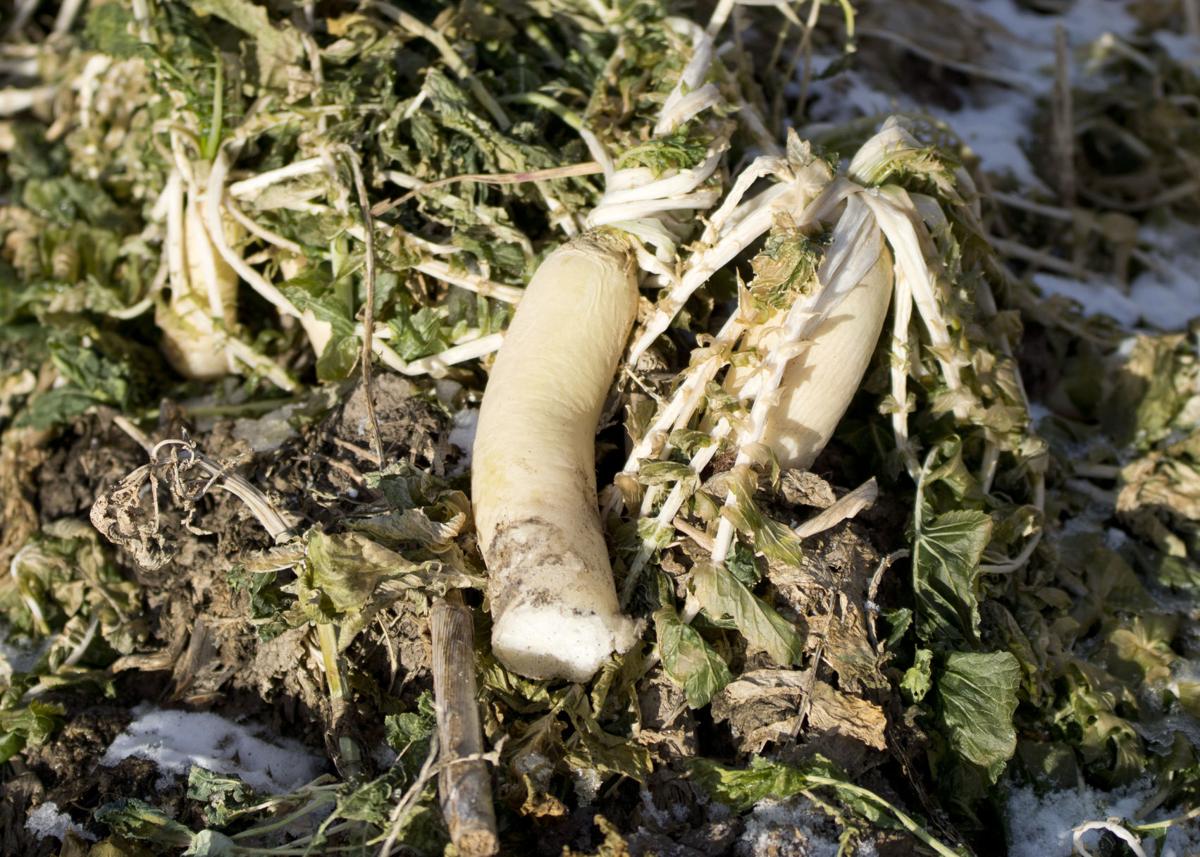 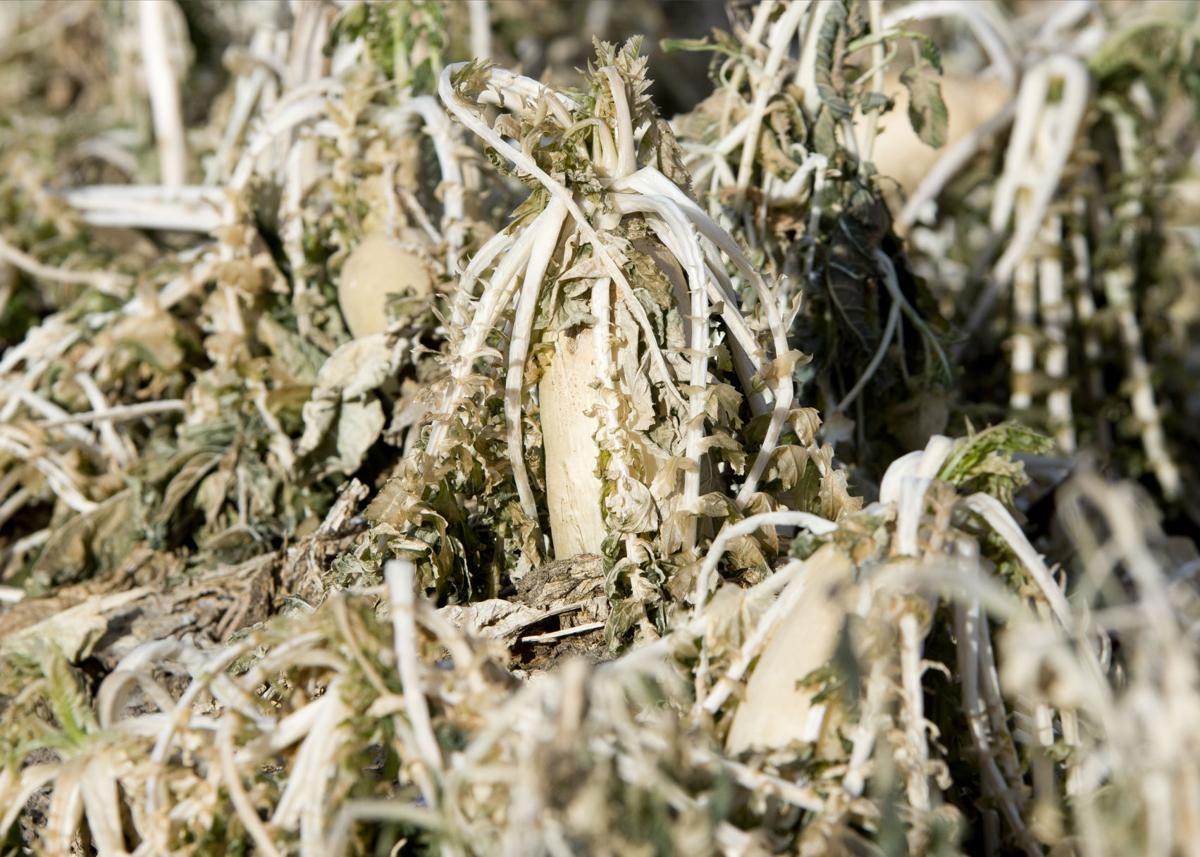 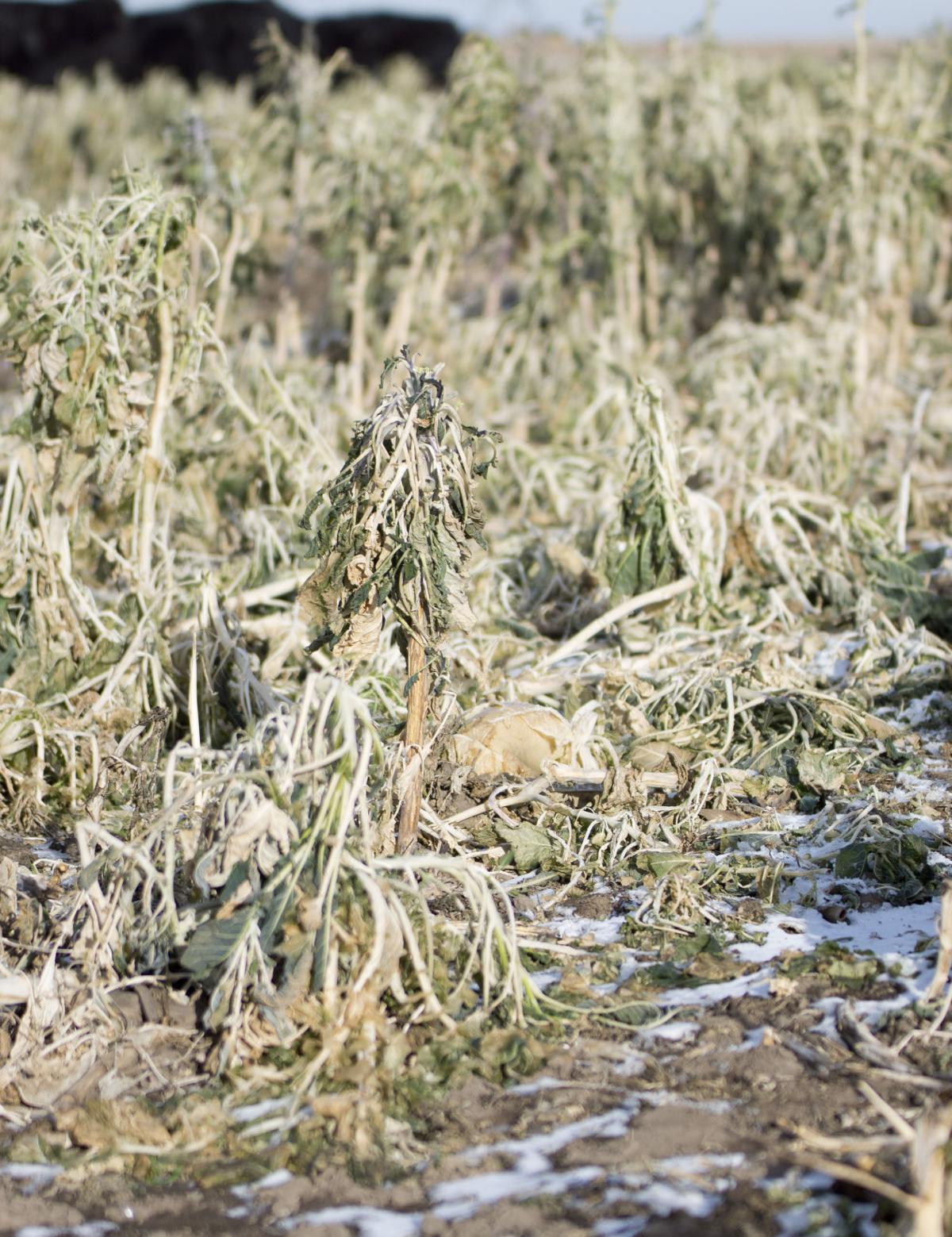 The leafy part of the turnip, radish and cabbage plants provide good forage for cows all winter long. (Journal photo by Derek Vogt.)

Cows can graze the turnip mixture from October through March and will have good nutrition throughout the winter. (Journal photo by Derek Vogt.)

The leafy part of the turnip, radish and cabbage plants provide good forage for cows all winter long. (Journal photo by Derek Vogt.)

Cover crops are known for improving organic matter in soils, but growers in Nebraska have found a way to improve soils and cow condition scores at the same time.

In October 2016, cows at Quirk Land and Cattle in Red Cloud, Nebraska, were turned into crop ground planted with a cover crop mix of turnips, Ethiopian cabbage and radishes. This mixture was spread onto the ground as the male corn rows were removed from the seed corn fields. After an adjustment period for the cows’ stomachs, they begin to gain condition on the fields.

“There will be enough feed for them to stay there until the middle of January when we will bring them in to prepare for calving,” said Casey Weiss, cow manager at QLC.

University of Nebraska-Lincoln professor of agronomy and Extension forage specialist Bruce Anderson said as a cover crop alone, a turnip mixture is not the best choice. If cattle eat the plants, however, soil and cattle both benefit.

“The turnips will absorb soil nitrates, break up the soil and improve organic matter,” Anderson said. “For the cows, the cover crop will be very productive grazing. The turnip mix has a potential for high total digestible nutrients, good protein and retaining nutrients through the moisture available in the plants.”

Anderson said the turnip mix is generally planted in August, following a small grain such as winter wheat. The mix will thrive in a looser soil structure—sandy or loamy soils, although most soils other than clay-type soils will work well.

In the Nebraska field where the QLC cows are located, planting was done by spreading 5 to 6 pounds per acre of the mix on top of the ground the first part of August on seed cornfields where the male plants were removed after pollination.

Anderson said cover crop mixes containing turnips need at least 60 days and up to 90 days of growth to have a good stand prior to grazing. He also warns of planting the seed too deep.

“A quarter-inch can be too deep when we are talking about how small the seeds are. We recommend drilling or broadcasting the seed. This can also be done in a no-till situation,” said Anderson. “If drilling, it’s good to have moisture soon after. On irrigated fields, running the pivots is a good idea if it doesn’t rain soon after the cover crop is planted.”

Turnips contain a lot of moisture and can have a laxative affect on the cows, he warned. Other grass plants like oats can be added to make the grazing have some dry matter. If a dryer plant is not added to the mixture, he recommends having hay or straw available on a free-choice basis. Weiss said since the seed mixture is added to a cornfield, there is a lot of corn stalk residue available for dry matter, too.

The ground where QLC cows are turned out is owned by a corn grower. QLC and the grower share the cost of the seed, which Weiss said is about $13 per acre.

“It takes a little time for the cows to adjust to the turnip grazing. The plants have so much moisture in them that it goes right through them until they acclimate their stomach to the change,” said Weiss. “Once that happens, they really start grazing. And after the freeze, the turnips and radishes have more sugars in them and the cows really like to graze them.”

Weiss added that after a freeze, cover crop foliage doesn’t hold as much moisture, which helps with the digestion. He said during the first few weeks of turning the cows into the field, they consume very little water because of the amount of moisture in the foliage of the turnips, radishes and cabbage.

Anderson said producers can expect to graze the cover crop until March 1 or when the weather starts to warm up, as cover crops will degrade rapidly at that point. Any crop can follow turnips as long as the field is cleaned up prior to planting.

In Nebraska, the combination has worked best after winter wheat or spring oats, but it could work in other situations as well. The benefits outweigh the challenges, but Anderson said it is important to be aware of some of the concerns.

“While having a cow choke on a turnip is very rare, it has happened. If the producer finds the cow soon enough, the root can be worked down through the throat and digested,” said Anderson.

“Iodized salt and other trace minerals should be available on a free-choice basis, as turnips can tie up some minerals available to the cows,” said Anderson.

Weiss said the QLC cows have free-choice mineral and fresh water available at all times while grazing the cover crop.

“We will definitely be grazing cows in the winter like this in the future. The cows are in great condition and the management is fairly simple,” said Weiss. “We like to have the cows in this kind of condition coming into calving time, especially when the temperatures are cold like it has been so far this winter.”