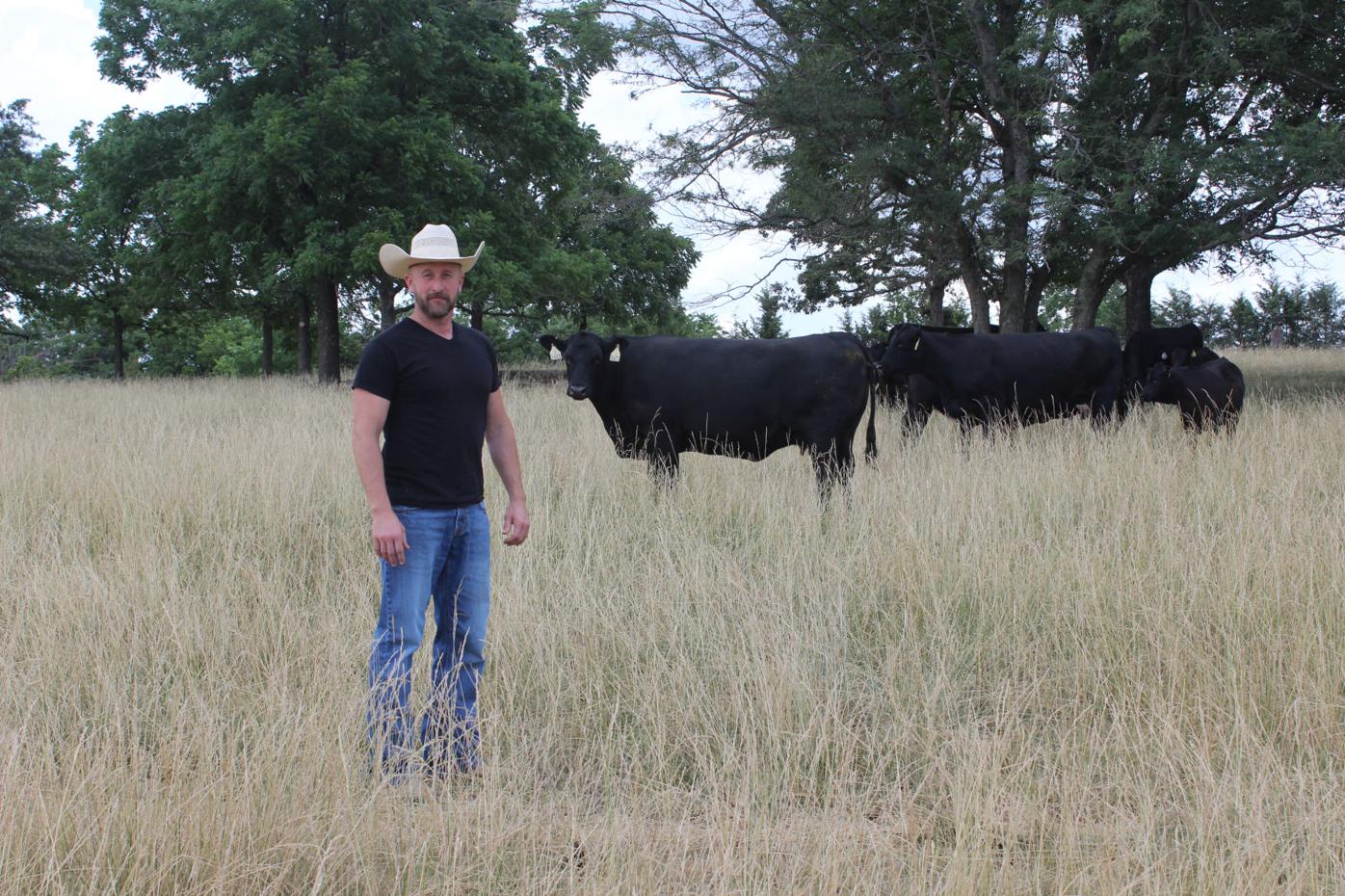 “Out of the 7,000 commercial cows that we run, we only make those bulls out of the top five percent, the highest indexing cows. These cows have proven themselves in a commercial fescue-based environment to be profitable—to be reproductively efficient, to produce calves that are really high quality and high profit on the rail,” said Nick Hammett, marketing manager for Circle A Ranch based in Iberia, Missouri. Circle A is one of the largest cow-calf operations and and an industry leader for superior genetics. The ranch has 24,000 acres across three locations. (Journal photo by Amy Bickel.) 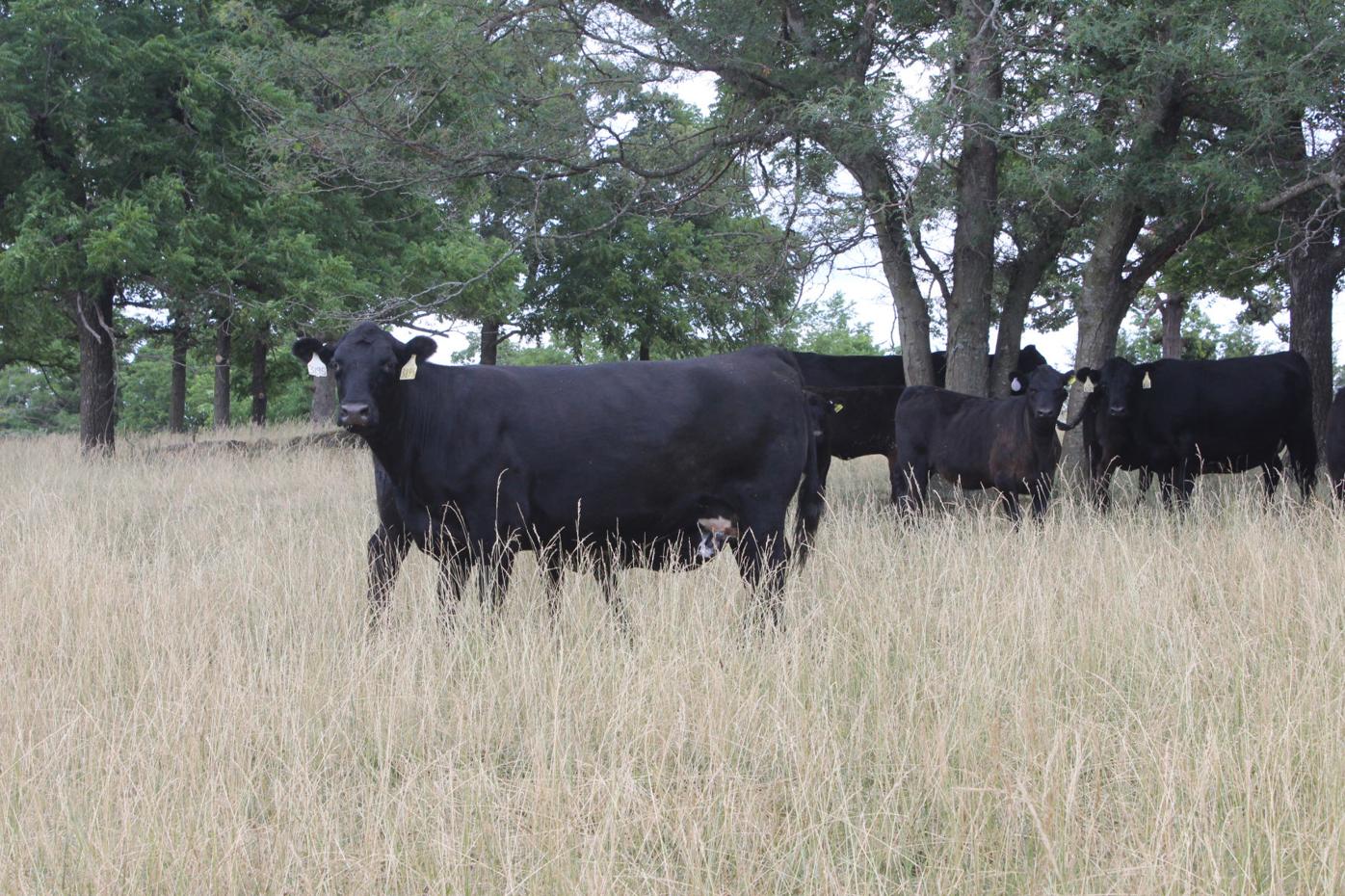 Cattle graze fescue pastures at Circle A Ranch near Iberia, Missouri. Circle A focuses on creating high-quality and profitable cattle in a fescue-based environment. (Journal photo by Amy Bickel.)

It’s tough, with the naked eye, to see the change on this spread of Ozark fescue.

Nick Hammett drives his pickup across the hilly terrain near Iberia, Missouri, where black cattle graze, just like they have for the past three decades. Quality is the motto here, he said. The best steaks start with the best genetics, which has always been the underlying goal at Circle A Ranch.

For years, the ranch boosted genetic improvement through its registered cowherd, creating a nucleus of genetics used to repopulate their commercial herd, plus sell to their growing producer customers.

Now, the ranch that has grown from a show stock-based operation to one of the country’s largest cow-calf enterprise and top-end seedstock producer is adapting again.

That doesn’t mean the underlying objective has changed, said Hammett, the ranch’s marketing manager. Circle A’s aim is still one of the most data-oriented, profit-focused beef cattle operation in the nation.

They just don’t need a piece of paper to do it, he said. Instead, they use years of real information and profitability indexes developed through their 7,000 head commercial Angus operation.

“We want to truly find the most profitable cattle,” Hammett said.

A foundation based on profit and quality

David Gust is a numbers guy. Creating top-end profitable cattle has been his goal since 1990 when he purchased 600 acres that would begin Circle A Ranch.

Gust, a self-made businessman from Chicago, Illinois, grew up visiting his grandparents’ farm. His attraction to the Iberia area developed during family vacations to the Ozark area, Hammett said.

“He was spending the money and trying to buy the best cattle he could buy,” Hammett said, adding, “he realized it wasn’t profitable, and it didn’t necessarily make you better cattle.”

Wanting to become a bigger player in the beef industry, Gust revolved his operation around a single principle: To produce high-quality beef genetics centered on a commercial operator’s profitability.

To do so, he had to start from the ground up.

Gust didn’t have a precise way to determine what traits were important to the profitability of the Circle A herd or that of customers’ herds. A procedure for balancing traits and accounting for input costs wasn’t part of the mainstream beef industry at that time.

In 1995, Gust, along with 51 members from across the country, started the Angus Sire Alliance. The tool provided multi-trait genetic selection based on actual profitability. Members enrolled their best bulls to be tested in Circle A’s commercial cowherd, Hammett said.

“They said, ‘we want to test these Angus cattle from a real objective standpoint and see what they are truly worth,’” Hammett said. “Ultimately, we started figuring out, ‘OK, this bull’s progeny might be worth more than this bull’s progeny.”

When Gust started the Angus Sire Alliance, he also began artificially inseminating all his cattle, whether the animal was registered or not. He also continued to keep track of expected progeny differences for growth and carcass traits and other data.

Hammett said the ranch keeps a balance between profitability and sustainability when measuring data.

“If we want to harvest those progeny and hang them on the rail, how much money per head is that animal going to add to our operation?” Hammett said. “So we basically use those profitability indexes to make our mating and selection decisions so we can ultimately produce higher profitability animals and get the consumer the best quality.”

Meanwhile, Gust zeroed in on his own inputs, too. With feed accounting for 70 percent of production costs, Gust built a feed intake research facility in 1998 where employees could measure individual feed intake on animals, Hammett said. In 2007, Gust expanded again, this time building a feedlot at Circle A’s north ranch near Huntsville to help capture added value for their own cattle, along with their customers’ livestock.

“We started finding we were selling bulls for good money, and they were better than average calves and our customers were taking them to the sale barn,” Hammett said. “When we take them to the sale barn, you have your whole year’s calf crop tied into marketing calves on that one day. And sometimes you get a good deal and you feel good about it, but sometimes you feel like ‘man, I really got raked over the coals today because the buyers weren’t there.’”

Changing the way they do it

More than two decades of measuring and selecting for actual profitability led to the two sales last year.

Hammett said over the years, Gust and his employees realized their non-commercial herd was performing the same, if not better, than their registered herd due to the emphasis on selection pressure. Moreover, these animals are tailored to a commercial fescue-based environment, typical of Missouri and southeastern states.

Circle A found success selling bulls from their non-registered cows, which they call Circle A Premium Bulls.

“We started finding that cattle out of our Circle A Premium Bulls were performing really well and really profitable in the feedlot,” Hammett said.

Through its 7,000-head commercial herd, Circle A can ultimately make cattle more profitable and more adaptive to the fescue environment because it can select from an elite population due to the overall scale of the non-registered herd, he said.

“Out of the 7,000 commercial cows that we run, we only make those bulls out of the top 5 percent, the highest indexing cows,” he said. “These cows have proven themselves in a commercial fescue-based environment to be profitable—to be reproductively efficient, to produce calves that are really high quality and high profit on the rail.”

The registered females weren’t any different, he said. They, too, produced respectable bull calves that could be sold at production sales. However, these cows were in the herd for a reason. Each had a registration paper.

“But that doesn’t necessarily make her an ultimately good, profitable cow,” Hammett said.

The change hasn’t been an issue for most customers.

Trent Vannoy has a 300 head cow-calf operation with his grandfather, Charles, and father, David, near Shelbyville, Missouri. He started using Circle A genetics about 10 years ago.

His cows today are producing uniform calves that gain better and are more feed efficient, he said.

“We bought bulls that gain really well and cut well,” he said.

The family uses Circle A’s buyback program, taking their calves to the feedlot near Huntsville. Vannoy said he sees premiums by going through the program. Also, after the cattle are slaughtered, he gets information back from Hammett on how they performed and how Vannoy could improve his herd’s genetics and profit.

“Nick can look at our cut sheets and tell us what we need to work on,” Vannoy said, adding that the past few years, “He tells us to keep doing what we are doing.”

Quality has improved, too, he said. His steers are grading 8 to 12 percent prime and most of the rest grade choice. Heifers average 18 to 22 percent prime.

That’s what Hammet likes to hear.

“We have our pulse on the commercial cattlemen and know what their wants and needs are because we live it every day,” he said. “We know what our genetics do. We have proven ourselves and earned our chops from our perspective.”