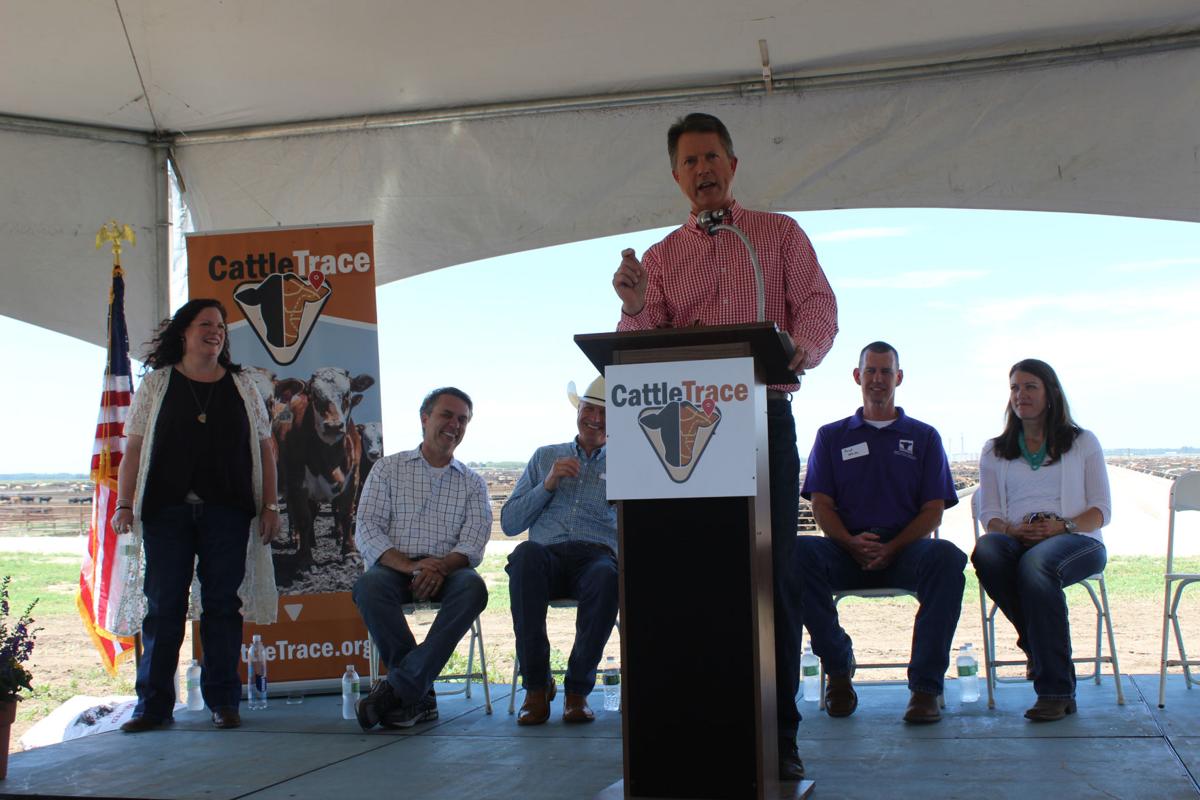 Rep. Roger Marshall, R-KS, said Kansas is on the cutting edge—leading the nation by working on an animal traceability program. "Consumers today are demanding this," Marshall said. "With China, there is a huge upside in opportunity and they are demanding this as well." (Journal photo by Amy Bickel.) 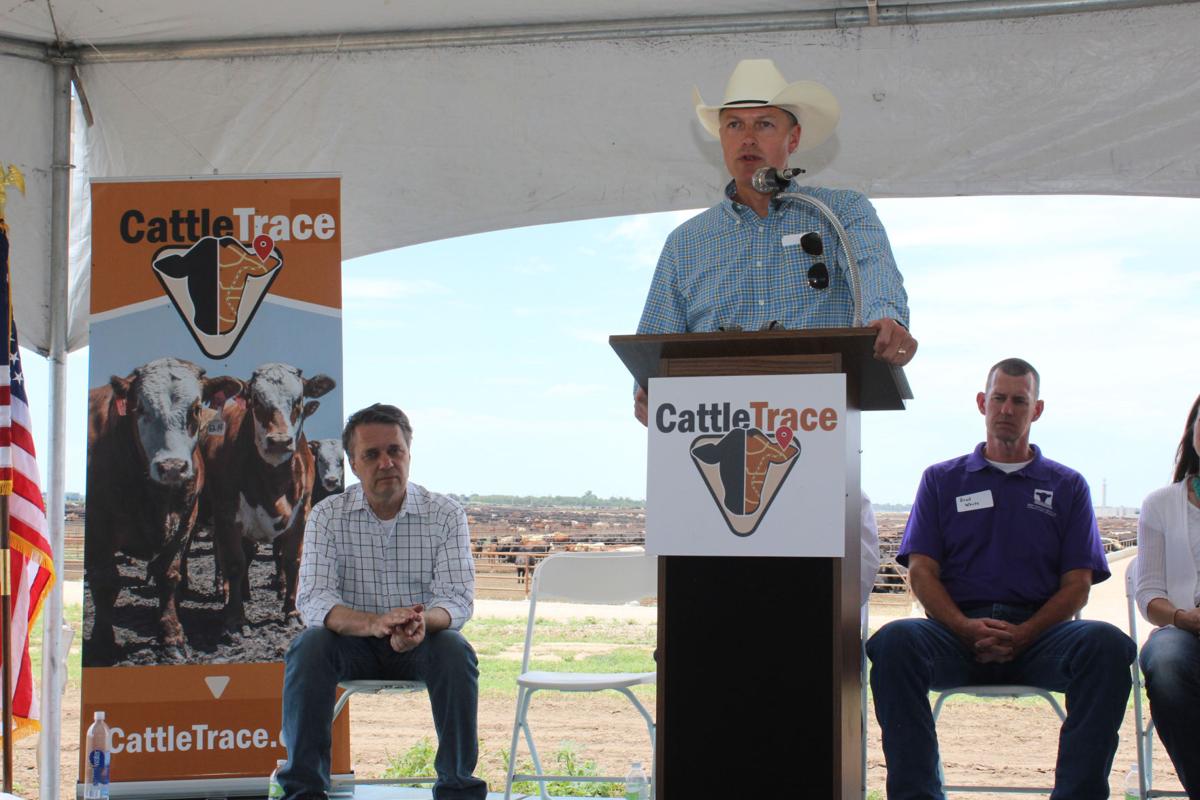 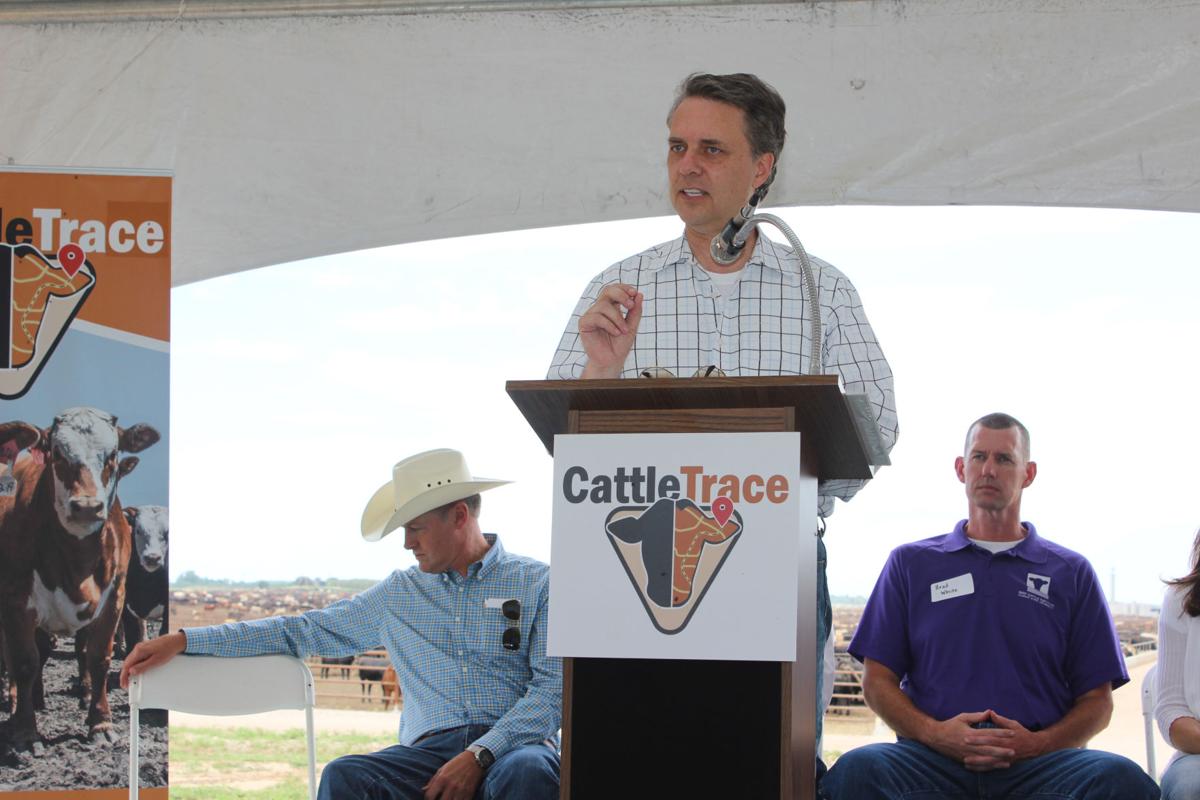 Kansas Gov. Jeff Colyer approved $250,000 for a public private partnership between the state, the Kansas Livestock Association and Kansas State University for an animal traceback program. "Fifty years from now our grandkids will think this is a pretty normal thing to do," Colyer said of the program the partners are calling Cattle Trace. (Journal photo by Amy Bickel.)

They called it the cow that stole Christmas, but cattlemen Steven Bagley knows that the single animal did much more than that.

Bagley was working at Dinklage Feedyards in Nebraska in December 2003 when the nation’s first case of bovine spongiform encephalopathy struck. It would cost the industry billions of dollars in lost export markets for beef and variety meats and, for a time, create a fear among consumers.

“But nothing ever happened,” said Bagley, who is now the operations manager for Green Plains Cattle Co., which has the capacity to fatten 180,000 head of cattle between two western Kansas feedlots.

That, however, is changing—at least on the plains of Kansas, Bagley said

With an Innovative Livestock Solutions cattle feedlot near Ellinwood, Kansas, as the backdrop, Bagley, along with a large group of cattle producers, Gov. Jeff Colyer and other state officials and industry leaders, launched a new livestock traceability project June 30. Their goal is protecting the food supply and the Kansas economy if a livestock disease outbreak were to occur.

Called Cattle Trace, the public-private partnership includes the Kansas Department of Agriculture, Kansas State University and the Kansas Livestock Association. Colyer said he authorized $250,000 this fiscal year toward the program.

As part of the two-year pilot project, officials plan to tag about 55,000 animals between late summer and fall then monitor them throughout the first year.

“We have had so many starts and stops with this,” Bagley said of traceability programs. “In Kansas, we decided to strike out on our own and try to be proactive.”

Kansas has been in several national traceability studies in the past 15 years. One project tracked cattle as they got on and off trucks. Another tested scanner technology at auction markets.

Other states tested similar technology through federal pilot projects. Those concepts seemed to fizzle over the years.

The momentum began to change in recent years, however. Competing countries like Australia, Mexico and Brazil launched their own trace back systems. Meanwhile, China, which reopened markets to the United States in the past year after a 13-year absence over BSE concerns, also wants a program, said Rep. Roger Marshall, R-KS.

KLA members said two things, McClaskey said. Traceability is important and that Kansas should be the leader in developing a program.

“We shouldn’t sit back and let someone else do this,” she said. “If there is going to be changes to the beef industry, Kansas should take the lead.”

In December, KLA members amended their policy to support mandatory cattle disease traceability for all ages of cattle, Teagarden said. With the policy shift, the industry began to take action.

Cattle Trace will utilize ultra-high frequency technology to collect data, such as a individual animal identification number, GPS location and date and time. Readers will be located at feedlots, sale barns and packing plants.

The idea is to trace animals throughout the food chain as quickly as possible, Teagarden said. Unlike BSE, some diseases—such as foot-and-mouth disease—are contagious and could ravage the industry.

“In a case of a foreign animal disease outbreak, we don’t have time,” Teagarden said. “We need to know now where cattle have been and what other operators might be impacted. We don’t have hours. We don’t have days. We need that information quickly.

“For the economic viability of the industry, the ability for our members, cattle producers to stay in business, traceability is a tool we need in the toolbox.”

Teagarden said KLA policy supports a mandatory national animal disease traceability system for all ages of cattle. However, through Cattle Trace, KLA leaders hope to show a working system will provide benefits and security along the food chain, garnishing enough buy-in that the system would not have to be mandatory.

Already, there are participants in every segment of the industry, from the cow/calf producer to the packer, said Brad White, director of K-State’s Beef Cattle Institute and one of the program collaborators.

“We are trying to get going as rapidly as we can so we will have some calves later summer and this fall that can start moving through the system,” White said.

Officials said the goal is to minimize the cost to producers, which was one of the concerns with past traceability programs. Also, records would be kept confidential through the KDA.

Kansas businesses showed their support, including ILS, which will be one of at least 10 feed yards participating in the pilot project.

Whether initial or accidental, a foreign animal disease outbreak would be devastating for businesses like ILS and others, said Brandon Depenbusch, vice president of cattle operations for ILS and a member of the Cattle Trace steering committee.

As of Jan. 1, Kansas ranks third nationally with 6.4 million cattle on ranches and feedlots, according to the KLA. A large concentration of Kansas’ cattle is in a 100-mile radius of Garden City.

The goal is to stop an economic catastrophe if a disease incident would occur.

“However, where we are today, the lack of an end-to-end traceability systems makes this impossible,” Depenbusch said.

Depenbusch said other countries developed programs after an animal disease outbreak. The U.S. beef industry has the opportunity to be precautionary, building a program on its own terms.

He knows there are naysayers and skeptics, but added a foreign animal disease doesn’t discriminate.

“It won’t care if you are a hobby farmer, a 4-H family, a rancher or a cattle feeder. We will all be affected equally.”