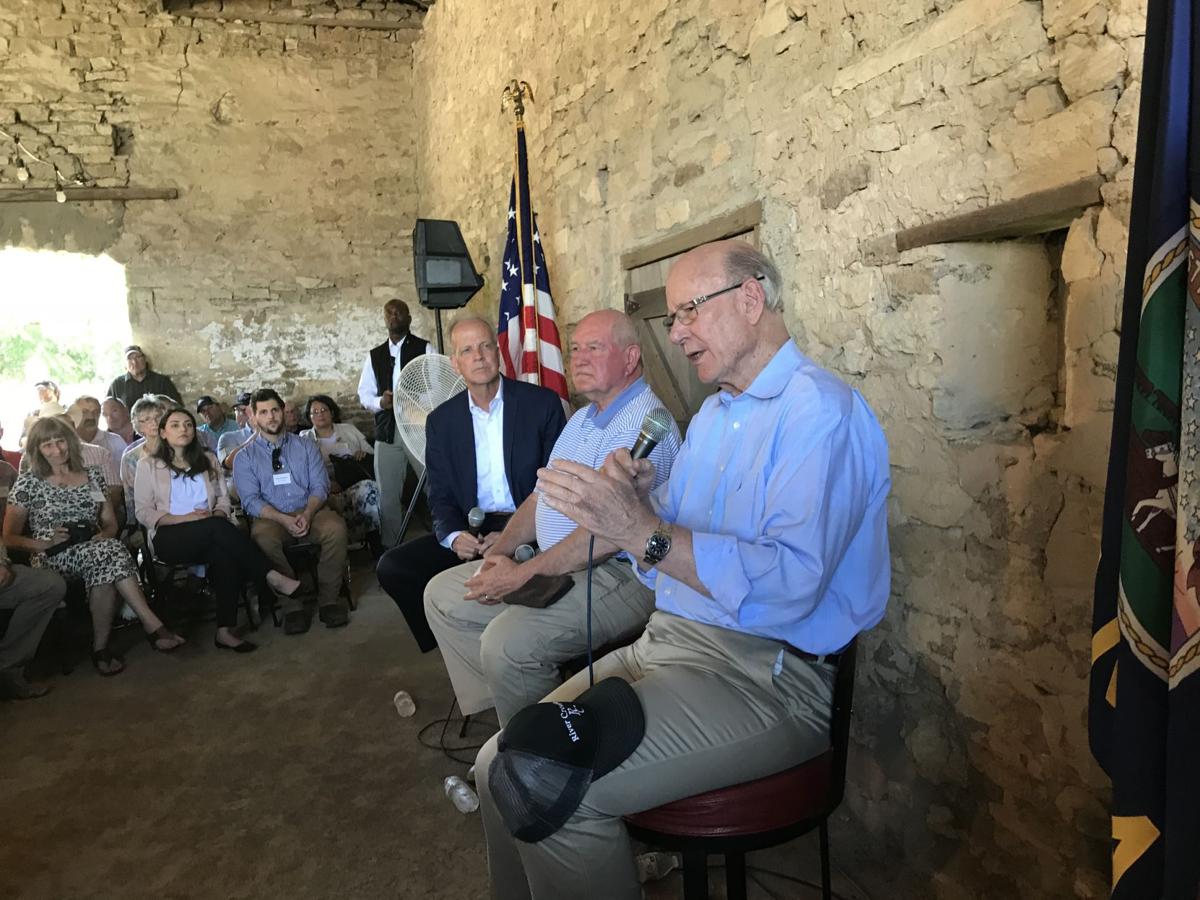 Sen. Pat Roberts, Secretary of Agriculture Sonny Perdue and Sen. Jerry Moran fielded questions on trade and the farm bill in a barn near Manhattan, Kansas, May 30, 2018. (Journal photo by Amy Bickel.) 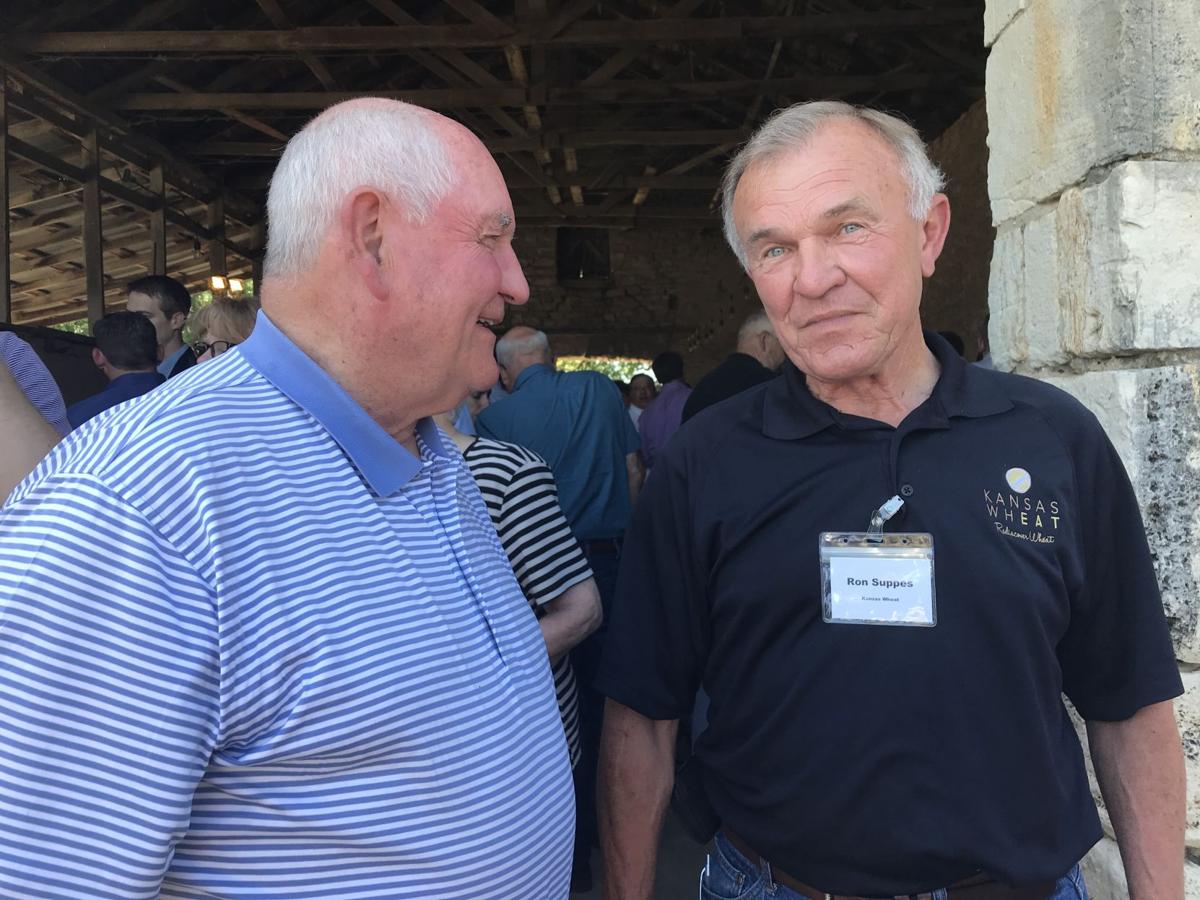 In the old stone barn on the outskirts of Manhattan, the soft-spoken cattleman made his voice heard as he faced U.S. Secretary of Agriculture Sonny Perdue.

Trade, Lee Reeve told Perdue and Kansas Sens. Pat Roberts and Jerry Moran, is important for the continued survival of his 46,000-head Garden City, Kansas, feed yard, which was started by his father, Jack, in 1962.

“One of the things we are really worried about now is trade issues,” the sixth-generation producer said. “We are exporting about 20 percent of our production. And we really need those exports.”

Reeves’ remarks spurred a lengthy, candid conversation between the three Washington Republicans, who fielded questions on trade and the farm bill from invited agriculture leaders who packed the dusty barn May 30.

The stop in Kansas was part of Perdue's cross-country tour since he took office 15 months ago. He said he's visited 40 states so far.

He said he is hearing some of the same concerns from other producers.

Perdue offered reassurance that President Donald Trump cares about farm country while noting the devastation a potential trade war with China could have on ag-dependent states like Kansas.

“I think we will get it done,” Perdue said of trade agreements, including the North American Free Trade Agreement that he and his staff work on daily.

However, Perdue added, “the certainty and predictably” that American farmers want regarding trade isn't there yet.

“The president is very much aware of who important exports are to the ag community,” Perdue said. “We know about 20 cents of every dollar comes from foreign trade.”

Since taking office in 2017, Trump has said he is withdrawing from the Trans-Pacific Partnership and has threatened to scrap NAFTA. In late March, he announced he would impose tariffs on steel and aluminum imports among other commodities to counteract China's unfair trade policies.

At the time, U.S. sorghum—a staple crop for Kansas farmers—was put in the middle of the crossfire as the Chinese government said it would target that grain and other commodities in retaliation.

Roberts said grain sorghum producers were in his office at the time. One young farmer said by the end of the day, he lost 80 cents on the dollar.

“We are using that gentleman as a pawn in terms of trying to get a better deal for agriculture for trade,” Roberts said.

Roberts apologized for his lengthy spiel but added, “This has been shared by so many people. I am a representative of farm country, and I hope we will be successful. I know the president cares about farmers. The president is very much aware of how important exports are to the ag community.”

Perdue said he felt confident they would get a deal done on NAFTA, noting U.S. officials are close to securing an agreement with Mexico. He encouraged farmers to stay optimistic about China.

Trump, Perdue said, knows what is at stake.

“He has, I guess I characterize it as a unique negotiating style that sometimes we farmers’ don’t understand,” Perdue said of Trump. “Nonetheless, he has been very successful in that and I applaud him for calling China’s hand on some of the unfair trade practices we know of.”

Moran said trade helps American agriculture stay competitive around the globe. He and Roberts have had several meetings with the president regarding the impact of international trade to the economy. Moran said Trump suggested creating a program that would pay farmers on trade losses. Moran said he and lawmakers stressed that is not what farmers and ranchers are wanting.

“Our farmers and ranchers don't want another government program,” he said they told Trump. “They want to earn their living in the markets.

“Our point to him was trade is the key to our survival across our states,” Moran added. “There is no more important issue in my mind for our success in Kansas than our ability to export, and it is not just agriculture.”

Moran suggested Trump try a different strategy with China by staying in TPP and forming trade partnerships that would disadvantage the country.

“Yes, China is a problem,” Moran said. “They cheat. They misbehave. They don’t follow the rules. But the solution is not a broad tariff battle. It is a narrow attack on them and line up the rest of the world with us against China. Don’t isolate us and keep us out of the markets.”

Moran said some of his constituents have told him they confident on Trump's strategy. Moran, however, said he doesn't know how the story ends.

“I hope this is a negotiating tactic that works but the risk is tremendous if we don't get it right,” he said. “If you put the weather and the commodity prices together today and add the loss of exports, it is a whole different world for the future of Kansas.”

Sen. Pat Roberts often refers to how Kansas farmers “pull themselves up by their bootstraps” during hardscrabble times.